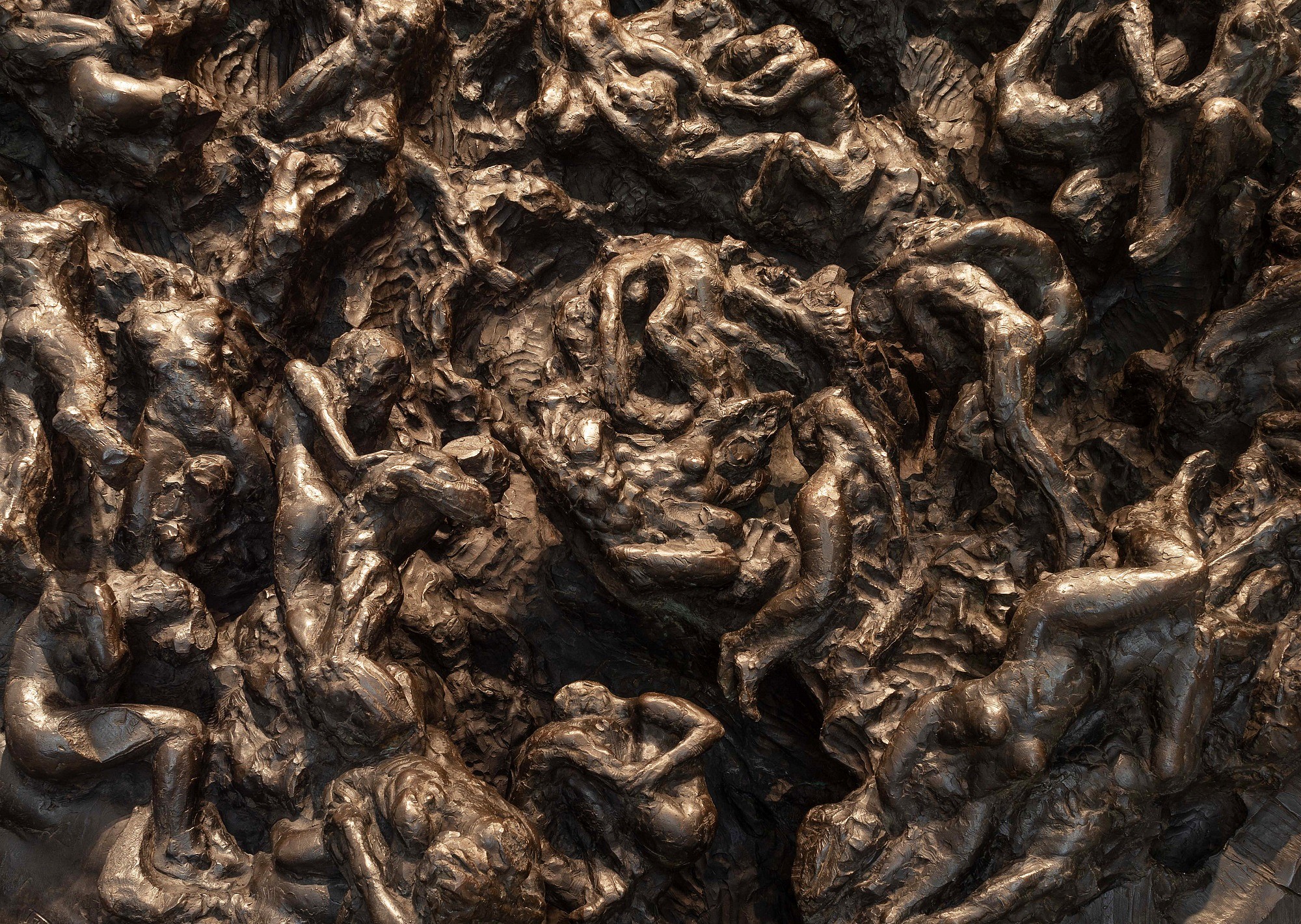 The genesis of Dylan Lewis’s Vortex begins at the end of a six year period of intense self discovery within the artist’s work. The initial manifestation of this striking image of a maelstrom of forms emerged spontaneously at the end of 2019 as the final work produced for the 2020 solo exhibition Chthonios. Perfectly encompassing the themes of self actualisation, struggles within human relationships, and striving for liberation from harmful internalised indoctrination, the work concretises the turbulence of human emotions.

Soon after that exhibition concluded its run, the world was struck by the Covid- 19 pandemic and South Africa went into a strict national lockdown. Remaining in his studio for the initial 21 days of this lockdown, Lewis set to work on producing a monumental incarnation of his earlier work, allowing it to evolve intuitively and organically rather than through exact reproduction. What this offered was an opportunity to immerse himself within the work and truly come to grips with the ideas that were coming to the fore.

The result: a visceral large scale sculptural work which brings to mind seminal pieces such as Auguste Rodin’s magnum opus The Gates of Hell and William Blake’s The Lovers’ Whirlwind. Both of these saw the artists drawing on the evocative imagery of Dante Alighieri’s Divine Comedy, but vehemently eschewing any moralising allegory in favour of celebrating the full spectrum of the human experience in all its complexity. With the Vortex, Dylan Lewis extends this striking, chaotic imagery to reflect on the agony and ecstasy of trying to connect with the ‘other’, both externally with other human beings and internally in the self.

The rich array of mythological signifiers and motifs which manifest in the final work are a testament to Lewis’s adept ability to channel what Carl Jung called the collective unconscious: deep-seated archetypal structures of the unconscious mind which are common across an entire species. Particularly interesting in relation to the Vortex is the idea of the ‘squaring of the circle’.

The composition of the sculpture takes the form of large circular arrangement enclosed within a square. While not an intentional reference by Lewis at the time, this contrasting of the two shapes recurs throughout a diverse array of mandala traditions in a number of world religions, throughout alchemical symbolism, and even in Jungian analytical psychology.

Common throughout these various incarnations is the idea of a circle within a square as a symbol of wholeness or totality, contrasting boundlessness with lucidity. This is exactly what this sculpture represents for Lewis.

Stated plainly, the Vortex marks a significant culmination in the narratives that have underpinned Dylan Lewis’s work from the very beginning: the searching for wholeness and self-actualisation against forced familial, cultural and social conformity. In earlier work it was exemplified by the desire to escape into nature. Newer works such as the Vortex reimagine this as a journey into the self. Perhaps paradoxically, where the earlier work manifested as solitary, the inner journey is one reflected by a desire for connection. It appears as a gateway or threshold, the swirling mass of figures extending recursively.

While it is easy to speak of the process of individuation in romantic terms, in practice it is a difficult and painful undertaking, no less than a metaphorical self-annihilation. With the Vortex, Dylan Lewis captures the sense of the sublime that comes from standing on a precipice and witnessing the tumult. It is a view from the eye of a storm, a reckoning with the prospect of being pummelled by a chaotic maelstrom of human emotions and being unsure of whether it will utterly destroy or bring about the intense desire for wholeness.

As with the idea of squaring the circle, Dylan Lewis’s Vortex becomes about achieving harmony through consolidating rationality with passions. It depicts the emotional battle of attempting to transcend the alienation of unchecked Logos – damaging religious, governmental, or societal constructs that seek to rationalise through fear and shame –and reconnect with the boundless instinctual life force of Eros.